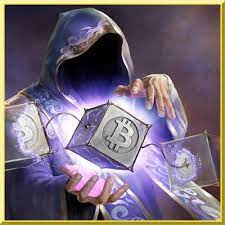 The Satoshicard will be to NFTs what the Mona Lisa is to paintings.

Although 1000 cards were minted, 800 were burnt leaving only 200 in circualtion. This card is very widely distributed because it was given out to early investors who purchased distribution arrangements. with Everdream Soft. Even the issuer Everdream Soft own less than 20 cards.

Card Description :  The mysterious Satoshi who is at the origin of the Blockchain. No one has seen him but everyone knows about him.

Artist Impression : Spells Of Genesis artist, paints a picture of Satoshi as an unknown character under a hoodie without any facial features. Emphasising the fact that his identity is still unknown.

This SOG Satoshicard NFT is the most important NFT card in the world because it is the earliest Satoshi NFT ever issued on any blockchain. Just looking at the image conjures up all the history, the controversy, all the good and bad experiences we all as individuals have had with Bitcoin and the Blockchain over the years. Without Satoshi the blockchain, and therefore NFTs as we know them will not exist.

Only 199 cards exist. This card is divisible, so even though 199 is the maximum number in existence. the true number will never be known as some may have lost passwords or keys, and we do not know how many cards are whole.

Satoshicard is a very rare card. A true collectors item. Like a limited edition copy of the "Mona Lisa" this NFT was issued by Everdream Soft on Wednesday June 05 2015.

The value of Satoshicard is that it represents the whole of the Blockchain ecosystem because without Satoshi Naamoto and his invention of Bitcoin, NFTs and everything beinging developed in the bitcoin space be it public or private would not exist.

As for the price ? Only 199 whole cards can exist. No doubt there will be fractions of this card floating around as well.

Trying to put up an argument as to the identity of who Satoshi Nakamoto is would be pointless. Even proposing that the real Satoshi Nakamoto should use the early private keys to sign a message does not prove that he or she is Satoshi. Only proves that they have the keys!!! This argument is just a red herring to draw in the gullible and uninformed.

1) Was it one person or a group of individuals ?

This is in reference to starting the Bitcoin software. Had it been a group of people huddled around several computers with a countdown to the start, someone would have talked about it. There would have been chatter before and after the event. There were none. We can therefore be sure that Satoshi Nakamoto acted on his own in the beginning. It was after that that he invited others to join in the nodes and mining of Bitcoin.

2) What was each possible candidate doing before, on, and after 3 January 2019?

In all probability the Genesis block was launched by one person. So if someone claims to be Satoshi Nakamoto he should be asked what he was doing before, on, and after the launch of the Genesis block! Approach the problem like a murder mystery! Where where you and what were you doing around this period. There is so much that can be asked and answered about this period that nobody other than Satoshi Nakamoto himself could provide an coherent account. By the way only one person have come forward!

3) What was the cost in launching the Genesis block.

This was a massive investment and commitment for an individual. It would be very difficult for anybody to know all the minutiae of problems involved in setting it up. Again only one person have offered any account of this investment.

Whatever the argument the most important problems a blockchain have to solve is scaling. Scaling meaning taking on anything anyone wants to use it for. It needs to be the baseline protocol for the Blockchain like TCP/IP.

In order to be a baseline protocol, the protocol must also be frozen. No more upgrades on this layer that would require everyone building on it to update their codes everytime there is a change. All upgrades are on higher levels.

Bitcoin Satoshi Vision have met the above two criteria. The blocksize is already unlimited, limited only to miners moving the caps based on technology advancements and economics.

Early on many of the script op-codes were deactivated by BTC developers for "security" reasons. All these op-codes have now been restored. We don't see any security issues as a result on BSV. Were BTC developers ignorant or just being untruthful. Restoring those op-codes just make the BSV protocol more powerful.

BSV protocol is now frozen. There will be no more developers argument on forking the chain. This is important as it takes the issue of governance off the table. Governance is basically passed to the miners who will act in their own economic interest.

My own opinion is that national digital currencies will be tokenised on the BSV blockchain. This will be the ratification that BSV have succeeded in becoming the base protocol.

Who Is Satoshi Nakamoto

Why have Adam Beck or others not claim that title? It is precisely because they cannot account for the events around the birth of Bitcoin. Only one person have come up to claim this title!

There has been critical examinations of the period before and after the release of the white paper and close scrutiny of the many discussions that Satoshi had with various people and groups. These are not relevant until we know who Satoshi is because all those "evidence" were made when he took pains to hide his identity. Quite oxymoronic.

Same may believe in the virgin birth but for Bitcoin there was a creator. The truth is out in the open. It is just that many cannot accept this reality, and like Covid 19 you deny reality to your own detriment.

Is Craig Wright Satoshi Nakamoto and does it Matter.

CNBC - Who is Satoshi Nakamoto - Not Him!

Best report and analysis on the identity of Satoshi Nakamoto

Note : Please feel free to contribute in the comments to improve this page and to use, for promoting your sales.
Posted by phanpp at 4:49 PM