Caught The Train But Missed The Station !

Caught The Train But Missed The Station 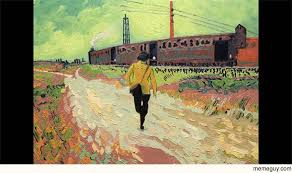 Early Adopters Don't Necessarily Win
Crypto has gone mainstream. However, most people coming into this space for the first time think that they are late to the party. That is not true. Over the years the crypto space have moved from just Bitcoin to Alt coins to competing platforms to decentralised finance and Non Fungible Tokens, and yet this space is still changing and evolving.
Take crypto as a monetary unit. How many would have believed that BTC today will be worth $60K? Very few, and those that rode the train to this stop must have locked away and left their BTC untouched. Most would have traded out, reinvested in other competing tokens or invested in worthless schemes if not scams.
Take Doge coin. The copper to Bitcoin Gold. I first wrote about it here and always believe that the support base was young, fanatical and crazy. I myself have owned, invested sand divested tens of millions Doge many times over and yet never rally made a profit. Something at the back of my mind can't get to grips with 10 billion issues a year. Still don't but look at it today. Again if you have 1 million doge you forgot about in a wallet somewhere....!!
Early adopters do not necessarily win. It was the wild wild west then and threats from regulators was always a drag on adoption. So what have I learned? Holding on to an asset waiting for it to rise in value is very hard to do. When do you get off?  Do you get on again? Price can swing as much as 50% in a very short time or it could lasta year or two. So many end up buying high selling low. What a Comedy but that's life.
Hodle, but what coins? Remember the Dotcoms. Many failed but a few like Google and Facebook became world dominating mega corporations. The same will be true for Blockchain. The successful coins will have to be useful and widely accepted.
Many coins profess being a digital currency as a use case. This is not going to happen. Every country will want and need to have a local currency they alone control. This is a national security issue. The only legal digital currency for local commerce will be their own. Every external country's digital currency including cryptos will be outlawed . Can they control this? Yes. Movements of Digital currencies by it's nature is transparent. The IRD will require explanations for any unusual flow ratios.
This means that Bitcoin, Bitcoin Cash, Litecoin, Dogecoin and many other similar coins that  are not platforms for building projects can't be used firstly because they will be made illegal and secondly because they can never scale far enough for this purpose.
Unless they can be used as money, they can't really be a store of value like art and precious metals. If countries were to accept Bitcoin or something similar as a reserve asset, then only countries must hold the vast majority of that asset. Fr Bitcoin and similar cryptos, this condition can never be met.
Countries hold other country's currency as reserve assets because it is used in international trade between countries. By this reasoning, because Bitcoin is not a reserve currency it cannot be used for international trade settlement. You may say that some companies are doing this already and you will be right but it is in a transitory space. National digital currencies are not in used yet.
Platform coins like Ethereum, Cosmos, Polkadot, Cardano, Eos and other similar coins have a better chance to remain relevant and future proof. In this Ethereum holds the lead. It is quite possible that Ethereum can overtake Bitcoin in crypto dominance in the near future. This will certainly raise eyebrows about the viability of Bitcoin long term.
In terms of scaling Bitcoin SV is the clear winner. It has the largest blocksize. Voluntarily capped at 2GB, it can be raised in future without hard forks. In addition BSV base protocol layer is frozen. Developers can build applications without worrying about reworking every time a change to the protocol is made affecting their application. National currencies can be tokenised to operate on the BSV chain. Expect this to happen as we move towards micro payments and Internet Of Things.
For store of value Non Fungible Tokens will be the new asset class. Which NFTs and on what platform has yet to be played out and will continue to be an evolving landscape. NFTs that sell for thousands and millions today may be worth nothing in future.
Best way to Hodle
Thanks to Defi, we now have a new way to hodle and earn an income. If you are saving for a retirement a little put aside every month into a mutual fund will add up to a sizeable lump sum for your retirement.
We can now do this with crypto. There are many platforms and methods. I will not go into the mechanics but the principle is that you deposit the coin that you want to hodle and earn an income stream for doing that. That income stream can be reinvested resulting in a system of compounding the weekly or even daily.
With this system in 3 to 5 years your hodled coins could increase in value many times over and/or you get an investment model that generates a good income stream for your retirement.
Do your own research on which system to use. The Kava platform from the Cosmostation wallet is one..
Posted by phanpp at 4:12 PM