Many Countries Will Ban Bitcoin

Many Countries Will Ban Bitcoin And Other Cryptocurrencies In National Commerce 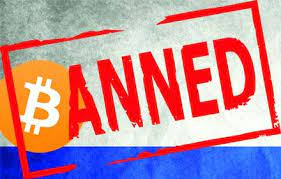 Except for small countries that do not issue their own currencies. Some countries choose to use the US dollar or Euro. These countries will use BTC or Crypto as a bridge towards issuing their own digital currency when this technology matures and scales for use as currency.

Over the last two days we saw the Crypto market tanked. About 600 billion in market capitalisation was wiped off the crypto board. Many attributed this bear stomp to first Elon Musk then to China banning cryptocurrencies. While they may hold a grain of truth it is just part of the gyrations of the market finding its way to relevance.

Since it's inception in 2009, cryptocurrencies have evolved to the point where it is now mainstream, and since China launched the digital Yuan a year ago every country including the USA is rushing to launch their own.

Launching a digital currency is not difficult. It is just another digital token, and anyone can create their own quite easily. The problem lies in control of the computer network safe guarding the security of the token. Every country will need to control the issuance, destruction and use of their digital currency within their own borders.

The digital Yuan is different from Alipay in that the digital Yuan is built on a computer network controlled by the Chinese Government. Alipay is just a Yuan clearing system run on Alibaba's own computers, essentially a bank. When the time comes Alipay will have to switch to the digital Yuan directly. In other works ditching their whole payment network setup.

The Chinese government computer network is the BSN ( Blockchain Services Network ) of which there are two versions. A internal Chinese BSN and an external International BSN. This means that the whole Chinese digital economy will be walled off from direct competition. It can only be access by a bridge between the International BSN and Chinese BSN. What form this bridge takes is still in development.

Any country wanting to issue their own digital currency will face the same issues. Should they build their own BSN, Use the Chinese International BSN or Build it on a decentralised private or public network. Setting up a network of nodes to operate a blockchain is expensive. We are talking about the currency of a country which is a national security issue. Computer systems and network can be hacked. For most countries running their own BSN network will not be viable.

The Chinese international BSN can be used to run any blockchain applications including digital tokens but few will want to trust their currency on a "Chinese Network".

The only choice remaining will be to build their digital tokens on a private or public blockchain. The question then is which blockchain. The issue is one of scale. Bitcoin (BTC) does 7 transaction per second while Visa does 1700. This is still way too small. We need unlimited transactions.

The only blockchain that can scale to these proportions is the BSV blockchain. Governments like Tuvalu, Norway and Columbia are looking into this and Tuvalu will most probably be the test case to prove the viability of running a currency on the BSV blockchain.

Any crypto currency that profess to be a payments system will be banned, made illegal or become redundant. A blockchain will need to find other uses other than "money".

Only the BSV blockchain scales

We have all seen the fees for BTC and Ethereum go into tens of $dollars per transaction whenever the network gets congested. Any system that rations their limited network capacity through fees will not be able to scale to the extent required of a national currency. Even the EOS blockchain with "free" transactions became unusable for days on end.

It comes down to blocksize. BSV is committed to unlimited blocksize. Fees paid per transaction are miniscule and can go even lower. If miners agree transactions can be processed without fees. Countries that tokenised their currency on the BSV blockchain can pay miners to include all their transactions directly by negotiations. Their users paying no fees. This is only possible if the blocksize is unlimited.