The Colossus Of Dao 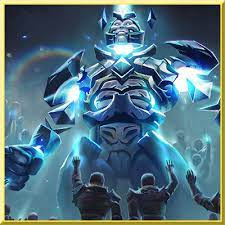 DaoSogCard - The Colossus Of DAO

Card Description :  The Colossus of Dao is empowered during the annual congress of Ether. The Ether knights lend him their magical forces. Holding so much energy, the Colossus is able to withstand all threats.

Artist Impression : Spells Of Genesis artist, taking a leaf from one of the lost wonders of the ancient world - The Colossus Of Rhodes.

This is an epic card with issues locked at 600 units. Although 600 is the maximum number in existence. The true number will never be known as like Bitcoin owners may have lost passwords or keys.

DaoSogCard is an epic card and was issued to commemorate the infamous DAO project which was hacked and which lead to the reversal of the Ethereum blockchain to recover hacked funds. This was a very controversial event as the blockchain was suppose to be immutable. It marks a very important part of the history and controversy in blockchain history.  A true collectors item.

A competing auction is also conducted by Bradley Hughes under @roaringauctions

A depiction of the infamous “The DAO” project. The colossus was supposed to be invincible, powered by Ether holders. The artwork was released just a day before The DAO got hacked.

DAO is an abbreviation standing for  “Decentralized Autonomous Organization”. Its goal is to create a structure with decentralized control, without people or groups governing the organization. Thus it was trusted to be uncorruptible.

The DAO got very popular and by the end of the funding period, it was the largest crowdfunding in history, having raised over $150m from more than 11,000 backers, far more than expected. In mid-June 2016, an unknown person or group attacked The DAO, exploited a software vulnerability, and started draining Ether, from the main address where it was stored.

Note : Please feel free to contribute in the comments to improve this page and to use, for promoting your sales.
Posted by phanpp at 6:53 PM