The Stealing Of Mt Gox 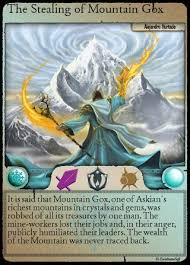 Card Description : It is said that Mountain Gox, one of Askian's richest in crystals and gems, was robbed of all its treasures by one man. The miners lost their jobs and, in their anger, publicly humiliated their leaders. The wealth of the mountain was never traced back.

Spells Of Genesis artist, conjured up the image of a wizard stealing treasures from a mountain.

In total 1200 cards were created. This card is indivisible. Although 1200 cards is the maximum number in existence. The true number will never be known as like Bitcoin owners may have lost passwords or keys.

The Goxcard is a collectors item. Like a limited edition copy of the "Mona Lisa" this NFT was issued by Everdream Soft on Wednesday October 08 2015 to chronicle the downfall of the biggest and earliest Bitcoin exchange at that time.

Back Story : Shaban says that though the hack became public in 2014, this was one of the card that was issued long after the event. According to Shaban the image of a wizard stealing treasures hidden in a mountain was in his mind when it happened.

The Marketplace  How Much Is An NFT Worth ? Short article  HERE

What can an NFT be used for ?

3) Copyright ownership of an artwork

5) Prestige of ownership if disclosed

7) It is not a cryptocurrency

Store of value depends on all the attributes above and more perhaps. An NFT Card has only X number of copies in existence. It is of value to the people who played a part in the event. Gox card represents such an event.

A card like the Genesis Card represents the birth of Bitcoin and thus will have wide interest even to people not particularly interested in Cryptocurrencies.

A card like Satoshicard was the apex card even among SOG enthusiast then. The fact that it depicted a mysterious like character " Yoda Like " makes it even more appealing even if we eventually agree on who Satoshi really is.

It is not a cryptocurrency and this is important. Blockchains are always increasing and decreasing in value. Even if the price of BTC collapses a quality NFT will hold its' value. This is important for those holding crypto to hedge their risk of ownership.

This market is huge and this fact has not really sunk in. FDCARD sold for $45,000 and by extension total FDCARD value is $13.50 million. This places it at no 845 ( Coin Gecko)  by market capitalisation, and it is only 1 Card in the SOG stable. Clearly this is a new asset class and deserves a ranking category all on its' own.

A parody of Mark Karpeles giving an account events.

Jeb McCaleb bought the domain Magic The Gathering Online Exchange in 2007, Mt Gox for short and used it to trade game cards. In 2009 he converted it to trade Bitcoin. He then sold it to Mark Karpeles in 2011. Mt Gox went on to become the largest crypto trading platform accounting for as much as 80% of all trades until its' bankruptcy in 2014.

At that time when nearly everybody who was dabbling in crypto was trading on MT GOX, you can imagine how angry the community was. Not only were Bitcoiners hit in the pocket but they were the laughing stock and set back Bitcoin adoption.

The mantra after this event was "Never leave your assets on an exchange" "Not your keys, Not your Bitcoins." Of course other exchanges were also hacked after Mt Gox but MT GOX was the poster child and this SOG GOXCARD "The stealing of Mt Gox" marks the event for posterity.

Mr Karpeles, Where Is Our Money? This guy confronted Mark in Tokyo.

How The Story Unfolds

February 26 2021 : Danny Brewster sues Craig Wright to hold safe funds in wallet 1Feex.. if he does  have control over wallet

Note : Please feel free to contribute in the comments to improve this page and to use, for promoting your sales.