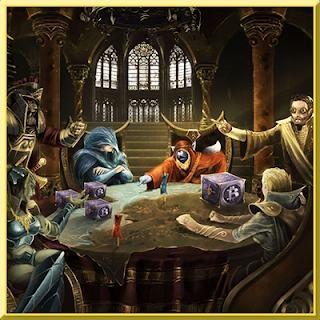 BLOCKSIZECD - The Battle For Blocksize

In Circulation :  300  ( Click to see distribution of card holders )

Card Description :  Politics in Askian are complex, decisions require consensus. The stakes for mountain miners and residents are high, thus creating friction within the community.

Artist Impression : Spells Of Genesis artist, painted an allegoric representation of the main characters around a table arguing over Big Blocks and Small Blocks.

Being a legendary card, only 300 were created. This card is indivisible. Although 300 is the maximum number in existence. The true number will never be known as like Bitcoin owners may have lost passwords or keys. Even Shaban the founder of Everdream Soft and Spells of Genesis personally only holds 2 copies 1 of which he is putting up for auction.

Blocksizecd is a very rare card. A true collectors item. Like a limited edition copy of the "Mona Lisa" this NFT was issued by Everdream Soft on Thursday August 26 2015 to chronicle the bitter dispute over many years until it resulted in the split into BTC and Bitcoin Cash.

Shaban : This card has a special meaning for me. It represents the battle for bitcoin blocksize that eventually led to the chain split between bitcoin and bitcoin cash. The picture depict allegorically some of the famous people of the bitcoin scene at that time.

When I posted this card on reddit I got shadow banned from r/bitcoin reddit where the policy was to ban any post mentioning blocksize. This card is a witness of that incredible time and is loaded with memories.

The allegoric characters are

Back towards us - Gavin Andresen

When Bitcoin was created the blocksize was unlimited. In order to protect against denial of service attack, Hal Finney in late 2009, with the reluctant consent of Satoshi and Mike Hearn set a block limit of 1MB. This was done on the understanding that it was temporary and would be removed later to allow Bitcoin to scale. A fact that was confirmed by Mike Hearn.

Around 2012, as Bitcoin adoption grew, talk started surfacing on increasing the blocksize. This soon led to full blown flame wars between the Big and Small blockers. Roger Ver led the big block campaign and was the target of much hate from the small block community. The small block supporters had the advantage because they gain control of Bitcoin source code.

The argument against was that big blocks could not propagate across all nodes fast enough for decentralisation. Luke Jr even proposed decreasing it to 400 bytes. Gregory Maxwell wanted it to run on his raspberry PI.

BTC developers proposed Segwit as a conciliatory means to increase the blocksize and solve Bitcoin's malleability problem at the same time. This was a step too far for the big blockers as according to them, it destroys the fundamental property that Bitcoin is an unbroken chain of signatures.

Even after that the attacks continued. It was a very divisive time fought on all media and scars remain to this day.

These articles chronicle much of what happened in the early days of Bitcoin.

Note : Please feel free to contribute in the comments to improve this page and to use, for promoting your sales.
Posted by phanpp at 9:28 PM