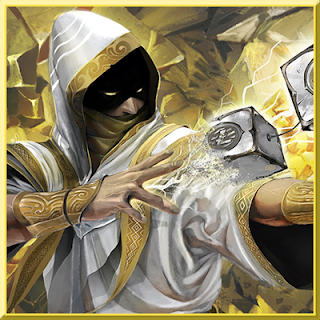 In Circulation :  500  ( Click to see distribution of card holders )

Card Description :  After Satoshi created the Genesis Block and the first crystals of Askian, others followed by creating different kinds of crystals shortly afterwards. One of the first and most successful ones was a man called "The Imitator". He created the coin of lite, and magically filled the Askian mountains with it.

Artist Impression : Spells Of Genesis artist, portrayed Charlie Lee as a lesser wizard compared to Satoshi, masked and with his lower part of his face exposed. He is shown clearly conjuring up Litecoin.

A legendary card. 500 were created. This card is indivisible. Although 500 is the maximum number in existence. The true number will never be known as like Bitcoin owners may have lost passwords or keys.

Satoshilite is a very rare card. A true collectors item. Like a limited edition copy of the "Mona Lisa" this NFT was issued by Everdream Soft on Wednesday February 05 2016

The Marketplace  How Much Is An NFT Worth ?   HERE

At the March 20 2021 @nflauctions a Satoshilite card was sold for a record $3300. This would give Satoshilite a market capitalisation of $1.65 Million

Shaban explained that Charlie suggested that he be portrayed as an immitator.

Let there be Lite. Charlie Lee created Litecoin on October 13, 2011, in his own words "as silver to Bitcoin gold".

Litecoin is an open source fork of Bitcoin, however instead of 10 minutes block time Litecoin was 2.5 minutes, and total supply was increased to 84 million.

Instead of SHA 256, Litecoin uses Scrypt. This was deliberate as Bitcoin was increasingly being mined using Asics, thus making it more profitable for GPU miners to mine Litecoin.

Charlie created Litecoin while he was still at Google. He worked on Litecoin in his own time out of his own interest in the project. He left Google to join Coinbase in 2015.

Charlie Lee explains why and how he created Litecoin

In December 2017 Charlie Lee sold all his holdings in Litecoin to avoid being accused of talking the price up. Interestingly he sold at near peak of around $300 the price crashed after and did not recover till this year.

Satoshilite was sold at auction for $3300 at least twice. This puts the marketcap for Satoshilite at $1.6 million.

Note : Please feel free to contribute in the comments to improve this page and to use, for promoting your sales.
Posted by phanpp at 3:53 AM