Cute as Cute Can Be 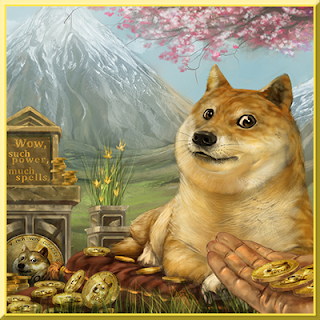 DogeCoinCard - The Shiba Inu, Cute As Cute Can Be

Card Description :  Doge is a worshipped dog in Askian. He likes to relax in comfortable places. When travelers want to see or pet him, they usually bring him some of his favourite Dogecoins. He is famous for his peculiar way of looking, said to bring his visitors wisdom and inner peace.

Artist Impression : Spells Of Genesis artist, have excelled themselves here. This smiling Shiba Inu with the backdrop of Mt Fuji and cherry blossoms in the background is just so alluring. A picture paints a thousand words..

This is an epic card with issues locked at 1200 units. Although 1200 is the maximum number in existence. The true number will never be known as like Bitcoin owners may have lost passwords or keys.

Dogecoin card is an epic card to mark the birth of Dogecoin, December 06, 2015. When release it was deemed a joke coin not to be taken seriously and only used by kids sending each other useless trinkets. Guess the joke is on us as Dogecoin is today a top 20 coin with a market capitalisation in excess of 8 billion dollars. It was originally touted as the copper to Bitcoin gold.

Dogecoin supporters are fanatical about their coin! They guard and protect their stash with their lives. 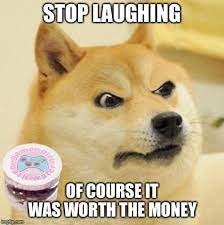 This SOG DogecoinCard issued December 07 2015 is the earliest historical NFT symbol for Dogecoin and there are only 1200 copies at the most. How much would Elon Musk pay for one of these or any of those newly rich and ever fanatical Dogecoin fans.

An auction is the best place for price discovery. Theo Goodman started his telegram site @nftauctions to do this. Sellers send their items to him on escrow and buyers register to bid. This is a trust based system. Another Telegram Auction Site @RoaringAuctionHouse has also been up and operating run by Bradley Hughes.

Doge Coin was created by Billy Marcus and Jackson Palmer using Litecoin basecode. This excerpt from an article by Tabarak Khan sums up Doge coin appeal in a nutshell.

Dogecoin launched on December 6, 2013, using the base code of Litecoin, which itself is an offshoot of bitcoin. It was developed by software engineers Billy Markus and Jackson Palmer, who decided to create a payment system as a joke inspired by the Shiba Inu dog meme, which also dates back to 2013. The meme typically consists of a picture of a Shiba Inu dog accompanied by multicolored text in comic sans font in the foreground. The text, representing a kind of internal monologue, is deliberately written in broken English.

Just like its mascot, the Dogecoin brand is fun, warm, and fuzzy.

Dogecoin is different from other cryptocurrencies because it is essentially a brand. As I’ve written before on brand storytelling, successful brands place their message into a customer’s worldview and make them feel good about themselves. Dogecoin’s creators made the altcoin as a meme crypto for people who didn’t care about traditional cryptocurrency but still wanted in on the fun. Even within the realm of cryptocurrency as a whole, Dogecoin differentiated itself through its “meme-y” ethos.

Its reputation as a feel-good currency was driven by feel-good acts encouraged by the community. On January 19, 2014, a fundraiser was established by the Dogecoin community to raise $50,000 for the Jamaican Bobsled Team, which had qualified for but could not afford to go to the Sochi Winter Olympics. The fundraiser inspired the foundation, led by Eric Nakagawa, to collect donations to build a well in the Tana river basin in Kenya in cooperation with Charity: Water. On March 25, 2014, the Dogecoin community successfully raised 67.8 million Dogecoins (around $55,000 at the time) in an effort to sponsor NASCAR driver Josh Wise.

Just like its mascot, the Dogecoin brand was fun, warm, and fuzzy.

Dogecoin’s power as a cultural product

In his book, The Information, James Gleick wrote that memes have embodied the evolution of information. “In the competition for space in our brains and in the culture, the effective combatants are the messages. The new, oblique, looping views of genes and memes have enriched us.”

When viewed through this cultural prism, “Dogecoin is best thought of as a cultural product, rather than a financial asset,” writes Jason Potts, professor of economics, RMIT University, and Chris Berg, senior research fellow and co-director, RMIT Blockchain Innovation Hub, RMIT University. “The reality is few cryptocurrency users hold it as a serious investment or to use in regular transactions. Instead, to own Dogecoin is to participate in a culture.”

The viral contagion of the GameStop and Dogecoin frenzy is fascinating because we witnessed to what extent memes are capable of moving markets. It was not only the spread of an idea, but the spread of behavior.

Ellie Rennie, professor RMIT University, Melbourne, categorizes the rise of meme coins as “playful infrastructures.” She writes that developers of decentralized finance apps (DeFi) “use memes to capture attention and drive users to discussion boards that function as knowledge clubs. In order to capitalize on these applications, you need skills in crypto platforms and finance concepts, but also a gamer mentality.”

As explained in this post on the psychology of memes, we witnessed to what extent memes are capable of moving markets with the viral contagion of the GameStop frenzy. It was not only the spread of an idea, but the spread of behavior. While the community at r/wallstreetbets is hardly a monolith, members stretched their dollars and humor to hang on to strands of an abstract network that, together, experienced the rush of understanding the language, deciphering the slang, and reveling in self-deprecating humor.

With Dogecoin it’s a similar phenomenon: Dogecoin founder, Billy Markus, told the Wall Street Journal, “The idea of dogecoin being worth 8 cents is the same as GameStop being worth $325, it doesn’t make sense.” The idea of a joke-currency becoming a trending market asset is amusing due to the irony. “Fate loves irony,” Musk said during a chat on the invite-only social media platform Clubhouse. “The most entertaining outcome and the most ironic outcome would be that Dogecoin becomes the currency of Earth in the future.”

The biggest push for Doge Coin of course comes from none other than Elon Musk. Doge coin price took a jump when he tweeted support for the coin.

Elon Musk says he will put Dogecoin on the Literal moon.

Note : Please feel free to contribute in the comments to improve this page and to use, for promoting your sales.
Posted by phanpp at 3:33 PM