The Coming BSV Skip and Flip

For the moment all eyes are on the huge price increase of BSV from around 98 USD to 170 USD over the last week. An increase of over 70% and would most probably exceed $200 soon. So what is happening?

For those who believe in the underlying technology of BSV the reason is clear and inevitable. BSV is the original protocol as described in the Bitcoin whitepaper and despite the timeline BTC and BCH are the forks off the true protocol. A "Back To The Future" scenario!

The main theme of this post is a prediction that BSV will soon surpass the price of BCH (The Skip) and thereafter go on to surpass the price of BTC ( The Flip ). Contrary to our intuitive nature of believing in the slow rate of change in the crypto sphere, these events will happen quite quickly, because theses events are very much determined by the mining hashrate.

For most of 2019 the hashrate for BCH was about 2% and BSV around 1% of the total hashrate. This week the hashrate in both these coins have doubled to 4% and 2% respectively. This means that miners are finding it more profitable to mine these two coins or the supporters of these coins are renting hashes to support their chain.

Notice the amount of "unknown" miners on the BCH and BSV blockchain and none on BTC. The hashrate on BCH have been fluctuating between 1.5 to 4.3% recently. For BCH, it is dangerous for its' hashrate to fall below that of BSV as it would very quickly be reflected in the price of these two coins.

Unknown miners have always been a part of Bitcoin mining, but the significant part that it is now playing on BCH and BSV is unprecedented. Seeing that is is more than 3%, the increase must be a switch from BTC mining either as a result of mining rentals or BTC miners dedicating some of their hashrates towards BCH and BSV without reveling themselves as doing so. 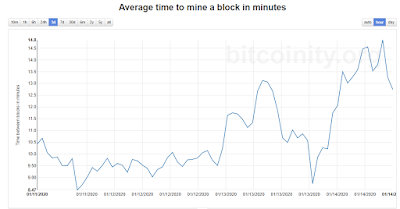 The increase in blocktime on BTC is starting to show. Keep an eye on this developing situation.

There is still much debate going on about which is the true Bitcoin and which will survive. Miners are business people and they will only be motivated by profit. It does not matter to them which coin wins as they will always mine the most profitable coin. 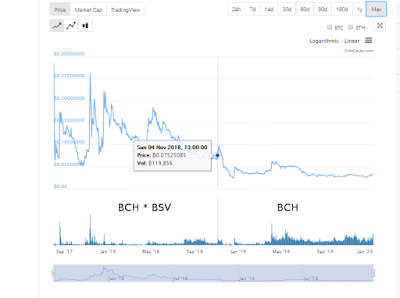 Prior to November 2018 the price of BCH which included BSV fluctuated a great deal but after that date BCH price have mainly trended downwards. 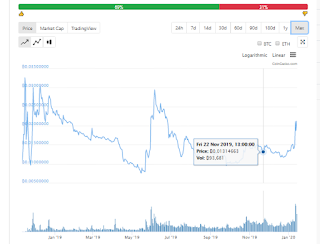 BSV price on the other hand trended downwards because it was delisted on many leading exchanges but has since trended upwards against BTC as oppose to BCH. The price drop as a result of delisting must be looked upon as a manipulated event and accounted for when studying the chart above. 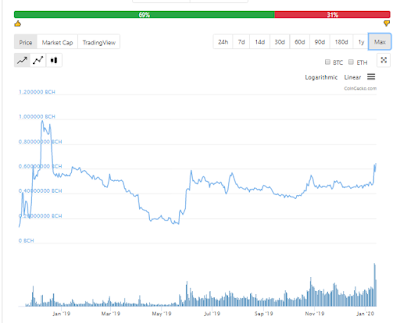 Against BCH the price of BSV is also clearly trending upwards.

All these events must be looked at as part of the continuing struggle between BTC, BCH and BSV as to which is the real Bitcoin. When 3 coins are competing on the same mining algorithm only one will win. This is a winner takes all scenario.

The Skip
It is dangerous for BCH if its' hashrate falls below that of BSV as this will soon be reflected in the price. Because the price of BSV have been on the uptrend we can expect that some miners are dedicating a little of their hashrate to mining BSV as a defensive move. These will mainly be the source of the Unknown miners we see on the BSV blockchain.

The dilemma for BCH supporters is that if they do not do something about the mining hashrate their coin will be in danger. As price is not a real factor in the volume of Unknown miners on the BCH blockchain we can only surmise that it is the result of hashrate rentals by BCH supporters.

This situation is unsustainable as the more BSV price increase against the more hash rate they must rent from the available rental pool and also carry the losses on the BCH mined as BCH price trends against that of BSV.

This will all come to a head when BSV price exceeds that of BCH. This is the Skip event, after which the price of BCH will move down sharply. BCH goal of becoming digital cash will be over. It is not possible to be used as a digital currency if your market cap is less than 2 Billion USD.

The Flip
During the BTC and BCH war, BCH overtaking and replacing BTC was known in the crypto community as the flippening. This did not happen and BTC successfully retain the overwhelming majority of the Bitcoin hashrate.

BCH survived the Chain Death Spiral because it had the Emergency Difficulty Adjustment programmed in. It was able to retain a percentage of mining hashrate commensurate with its' price for profitable mining. This also applied to BSV after it forked from BCH.

We have already seen today at least 3% of hashrate moving away from BTC. As the battle between BSV and BCH intensify we will see more hashrate moving away.  The BTC blockchain is acutely vulnerable to loss in hashrate and the Chain Death Spiral. We may start seeing a slowdown in BTC blocktime in the next few days.

The halvening of the BTC, BCH and BSV will have a large impact on the price and hashrate distribution between these coins. If prices do not double to maintain profitability, it must be met with increasing value collected through transaction fees. Only BSV have the capacity to gain more from transaction fees per block than block subsidy.

Note the steady increasing trend in transaction fees over block reward for BSV.

Soon after The Slip, our attention will be turn to The Flippening round two BSV against BTC. This time there will be a real difference in ideology between the two chains.

A coin can only be relevant if it is useful. It will not be useful to the masses unless it can scale. Here BSV clearly trumps BTC as it can already achieve thousands of transaction comfortably while BTC is still stuck at a maximum of 7 transactions a second. Large blocks means lower cost per transaction leading to new applications built around micro transactions. Usefulness brings mass adoption. BTC is clearly not geared towards mass adoption but towards being used by a minority as digital gold. This will not succeed as it requires Governments to adopt BTC in their currency reserve in order to push the price of BTC towards a million dollars a coin perhaps. This is unlikely because participants in the world monetary system will not want to see huge chuck of wealth in BTC they do not control.

BSV on the other hand will achieve this by default. In striving for scaling and mass adoption and it will become embedded into all our lives at a global level. National currencies will be tokenised on the BSV blockchain and this will be the "Killer App" that will cement BSV as the real Bitcoin.

With scaling comes mass adoption leading to The Flippening.

Last Note For The Skeptics.
If you are still skeptical about the above then this chart may change your thinking. Using BCH as a base every crypto coin including BTC is negative except for BSV. 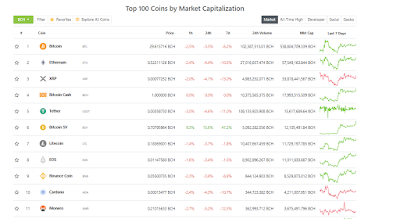