With BTC halving yesterday all three coins have halved and we can now expect that miners will be rational and mine profitably. Prior to halving BTC normally commands up to 98% of total hashrate. As of today (14/5/2020) this has reduced to 89% or 95 ExaHash and blocks found over the last 24 hours have reduced to 109 block from the standard of 144 blocks.

Based on current prices BTC hashrate will decrease to 70% before mining equilibrium is achieved across all three chains. If this happens quickly and the hashrate drops to 84 ExaHash BTC chain will slow to a crawl. Unlike before miners who have left will not return to mine at a loss out of loyalty. Panic may set in when this becomes clear which will lead to a drop in price and we enter the dreaded Chain Death Spiral. 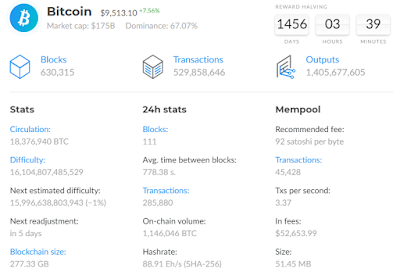 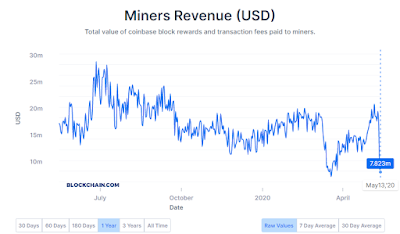 What will inefficient BTC Miners do?

BTC hashrate must reduce to 70 Exahashes to equate pre halving earning levels. It is currently 91 Exahashes (15/5/2020) . A reduction from 95 yesterday. Where will these miners go will they move to BCH and BSV or will they shut down altogether?

Can they move to BSV or BCH ? 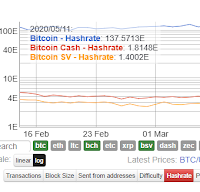 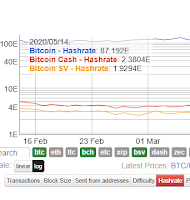 Since BTC halving the hashrate of BCH and BSV have increased to 3% and 2% respectively. However the miners who moved here will also be mining unprofitably as the price of BCH and BSV remained stagnant.

This situation is fluid and developing. The BTC mempool is increasing fast. 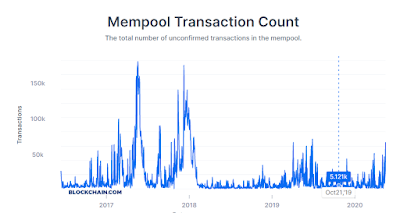 It now cost over $5 to transact on the BTC chain. This situation will get worse.

Why is the price of BCH ans BSV stagnant?

Since halving the price of BTC moved from $8700 to $9700 but the price of both BCH and BSV did not move in tandem. This can only mean that the supporters of each chain have remained steadfast.

BTC supporters are unable to push the price past the required level of $14,000 at least. BSH and BSV supporters can remain where they are. Unless BTC supporters moved over to either of these two chains their prices will remain stagnant. The ball is in BTC supporters court. As the mempool bloats, and cost of transactions get ever higher, panic will set in.

Because BTC chain is slowing down, it is unlikely that BTC price will go any higher. If panic sets in BTC price will collapse.  At time of BTC halving it was expected that the next difficulty was to be readjusted in 6 days that has now passed and it is expected to take another 3 days. I suspect that it will be even longer possibly another 6 days. If this is true then the next difficulty adjustment could take as long as a month! Something will break before then.

BTC miners have been net selling mined coins since the halving

This graph from Byte Tree shows the net selling by BTC miners since the halving.